Alongside the Luther Bible, the Brothers Grimm's Children's and Household Tales are among the world’s most famous and most prevalent books from German cultural history. Born in Hanau and brought up in Steinau an der Straße, the brothers Jacob and Wilhelm Grimm lived and worked in Kassel for over 30 years. Their unique collection of European and Oriental fairy tale traditions made them famous around the world, and they remain among the most significant representatives of cultural history in Hesse to this day.

The most important surviving source for how the Grimms’ fairy tales came about and the impact they have had is the personal copies of the Kinder- und Hausmärchen in Kassel, which include many hand-written additions and notes made by the Brothers Grimm themselves. These form the core of the nomination application. The copies were added to UNESCO’s "Memory of the World" register (World Document Heritage) in 2005. 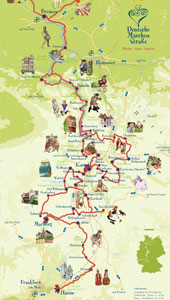